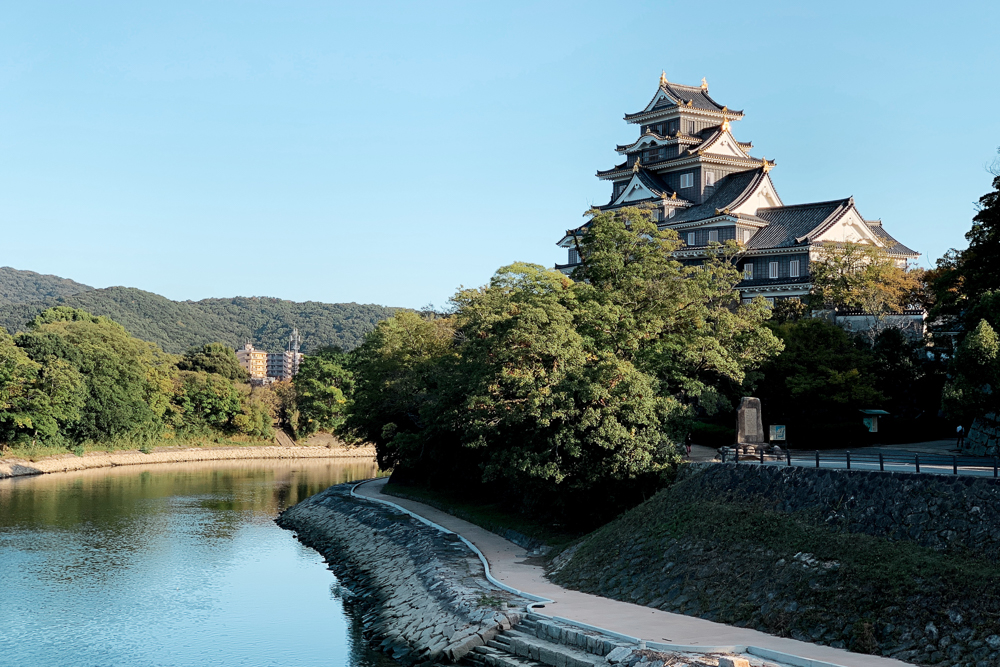 …and so we get to part three of my summary of places we visited in Japan; this time, Okayama and around.

The journey from Nagasaki was really simple, although we were slightly gutted that we were on the wrong side of the first train (from Nagasaki to Saga) to see the Ariake Sea and Mount Unzen. From Saga it was a Shinkansen all the way through to Okayama – and it was as awesome as always.

We were a little unfair on Okayama itself, in that we used it as a base to explore the surroundings, rather than spending time in the city itself (which probably would have been good to explore). We did at least get some time on the first day to explore the castle and nearby gardens (Koraku-en). 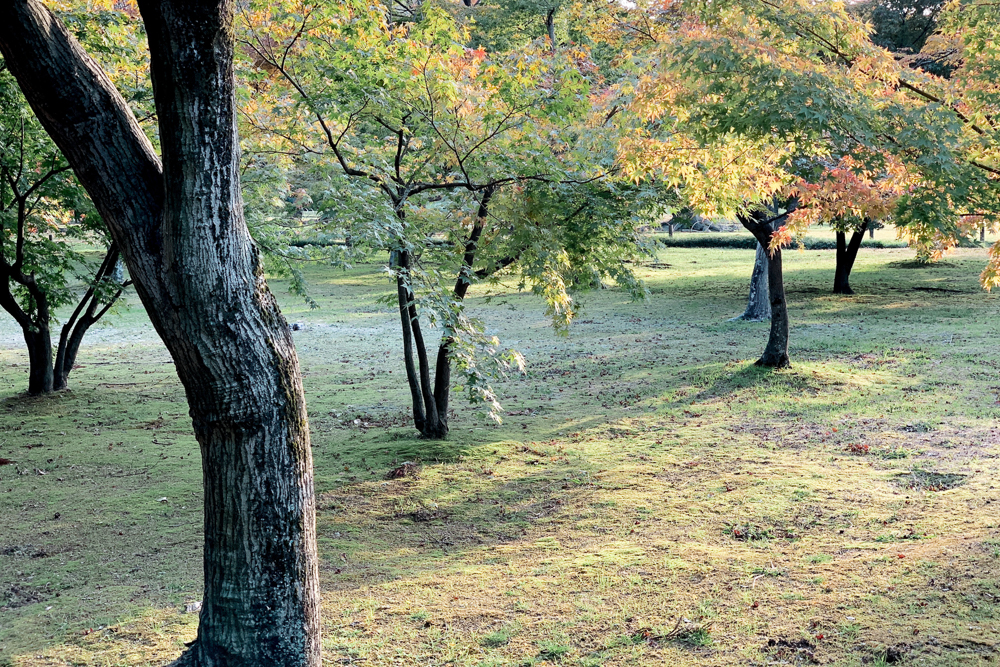 I think it’s fair to say that the castle is more impressive from the outside than it is inside. We’ve found this to be the case in all Japanese castles we’ve visited, with the possible exception of Nijo-jo in Kyoto (which has ninja floors!). Koraku-en was stunning though, we were there towards the end of the day and the light was stunning. The garden is divided into distinct areas, with plenty of water. There’s a lot of grassland, and I suspect in certain seasons (spring and autumn) it will be beautiful. We managed to see the leaves of the maples as they were just beginning to turn. 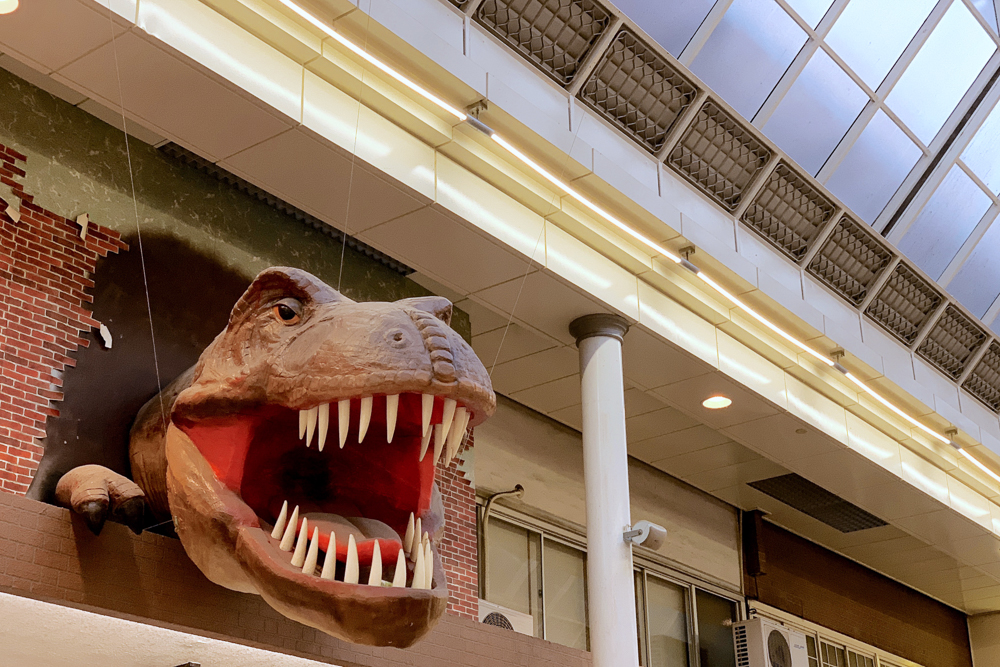 Like so many places in Japan, Okayama has its own covered shopping street. This time it felt a little unloved, but we still managed to find a decent coffee shop – and a somewhat surprising dinosaur. Following this, we headed to Loft for the first time this visit. Loft is one of our favourite shops in Japan, with great character goods, zakka and Be@rbricks.

Our first trip out of Okayama was to Naoshima, an island with an overabundance of art due to the curation of the Benesse corporation. 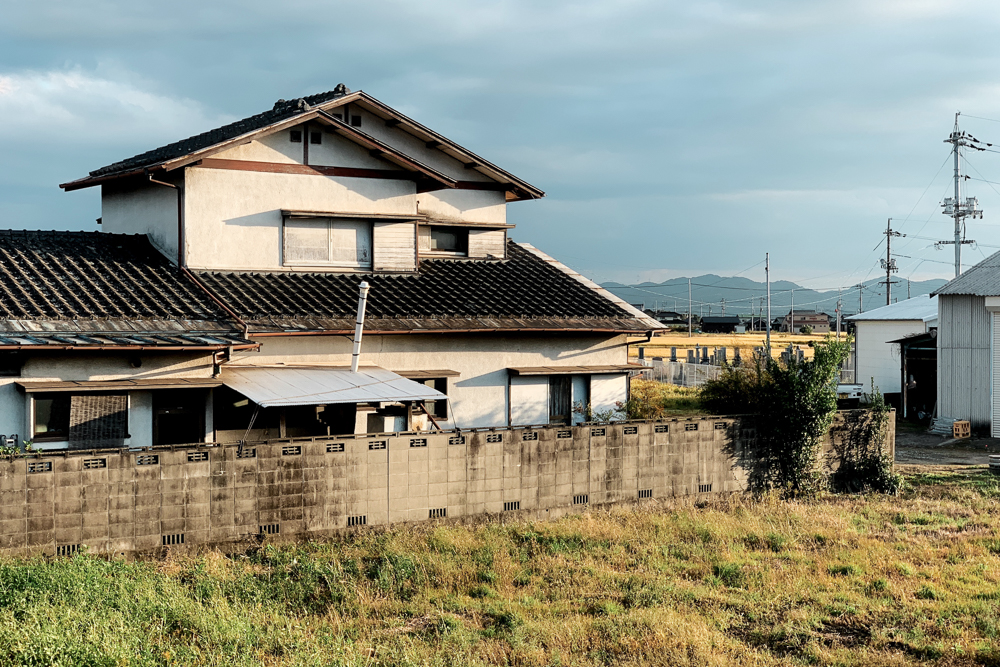 On the way to Naoshima

The journey to Naoshima is absolutely great – starting with a small train from Okayama station (we found it a little hard to find the platform for some reason). After changing trains (simple as always), you get to a port town, and it’s a swift walk over the road to the ferry to the island. We were lucky with the weather and able to say on the deck during the crossing, and it was lovely to see the small islands of the Seto inland sea as we trundled past. 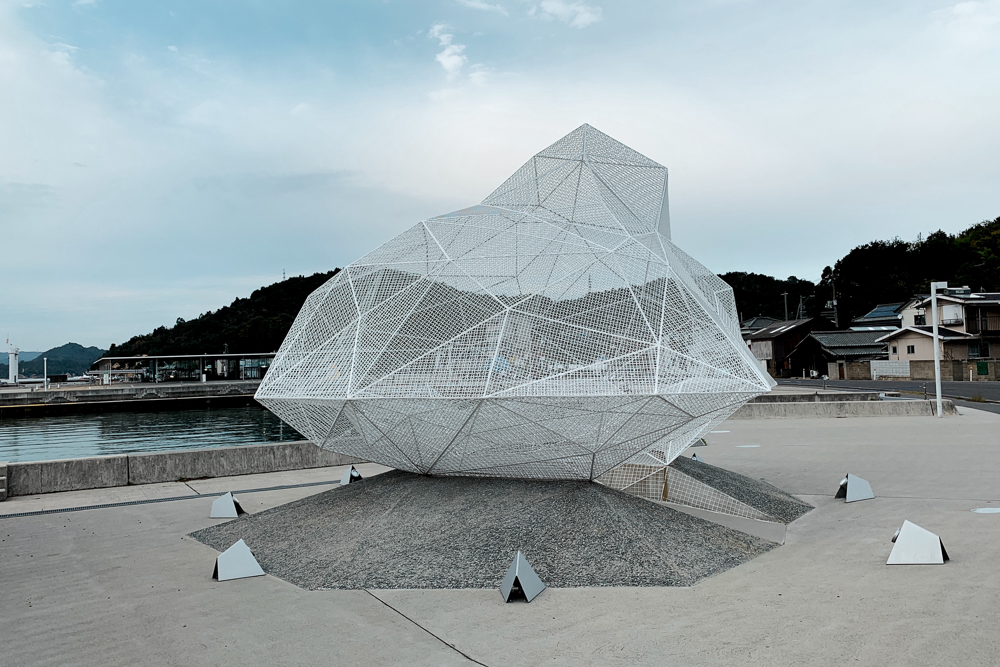 On arrival at the ferry terminal you can immediately see the public art from the ferry terminal, such as one of Yayoi Kusama’s pumpkins, and the Naoshima Pavilion. After a wander around Miyanoura, and a quick bite to eat from the 7-11, we headed off on the local bus to Tsutsuji-so. The bus journey was fun, lots of people seem to stay on the island, and it was also fascinating to see how local life seems to intermingle with the art and tourism. 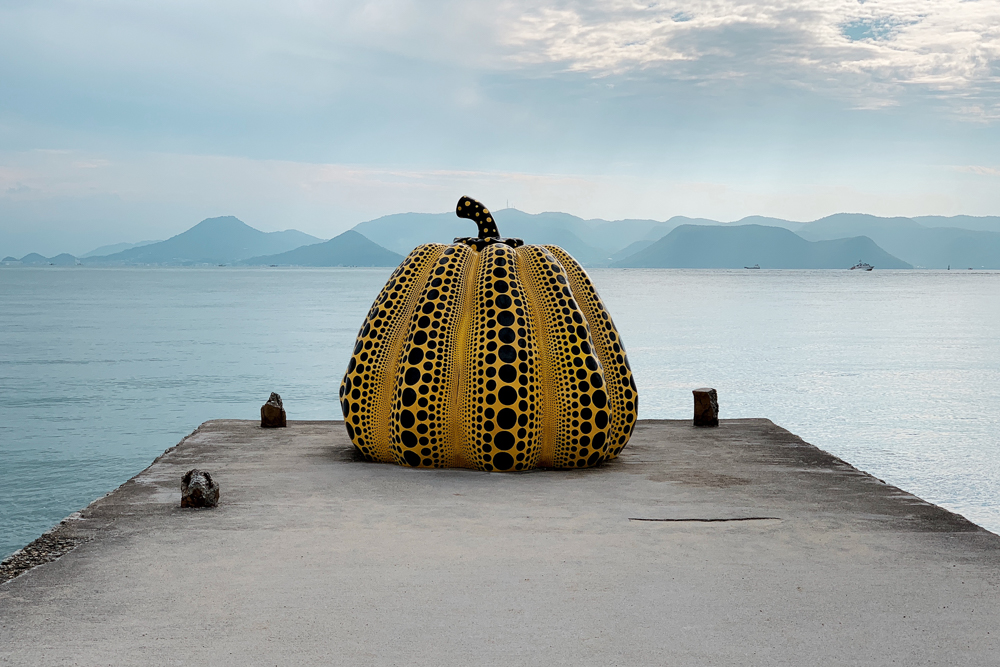 I have to ‘fess up here, and note that we didn’t go into any of the museums. We’d decided that what we really wanted to do was walk around the island and see the public art – museums just seemed like hard work. The island is a little hilly, but it was beautiful to walk around, with the usual scary spiders visible most of the time. We eventually circumnavigated back to Miyanoura, had a decent coffee and then retraced our steps back to Okayama. This all took the best part of a day, but it was well worth it. I think if you want to make the most of Naoshima it would be worth staying though. 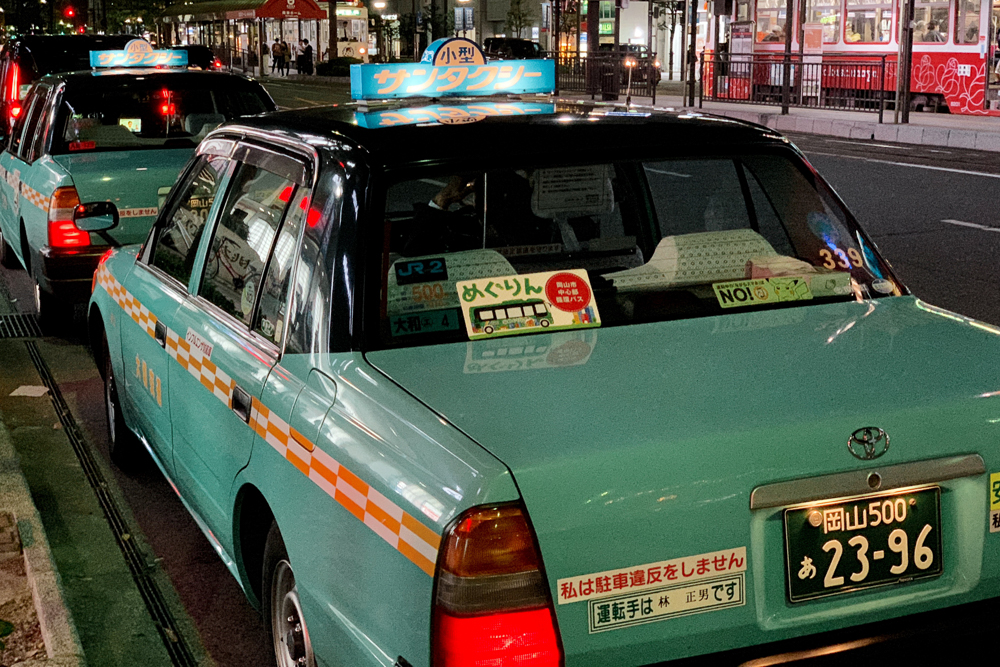 Yep, we left Okayama again on the following day…and actually this was the day that I’d really been waiting for, as I had wanted to stay in Okayama specifically so we could go to Kojima….but first, Kurashiki. 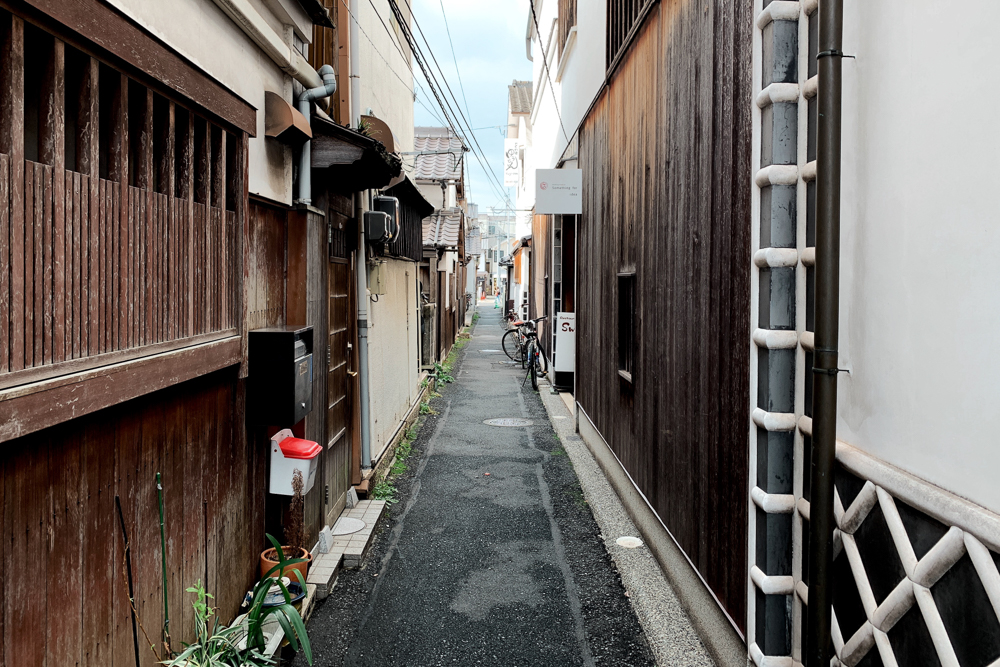 Kurashiki is one of those lovely touristy towns that you see on postcards and travel shows. This is primarily due to the central canals, with boats that you can take up and down whilst wearing a straw hat and losing any remaining dignity. We did not do the usual stuff, but instead wandered the back streets (including a covered mall). These were some really pretty backstreets and definitely worth exploring for the glimpse they offered into local life. 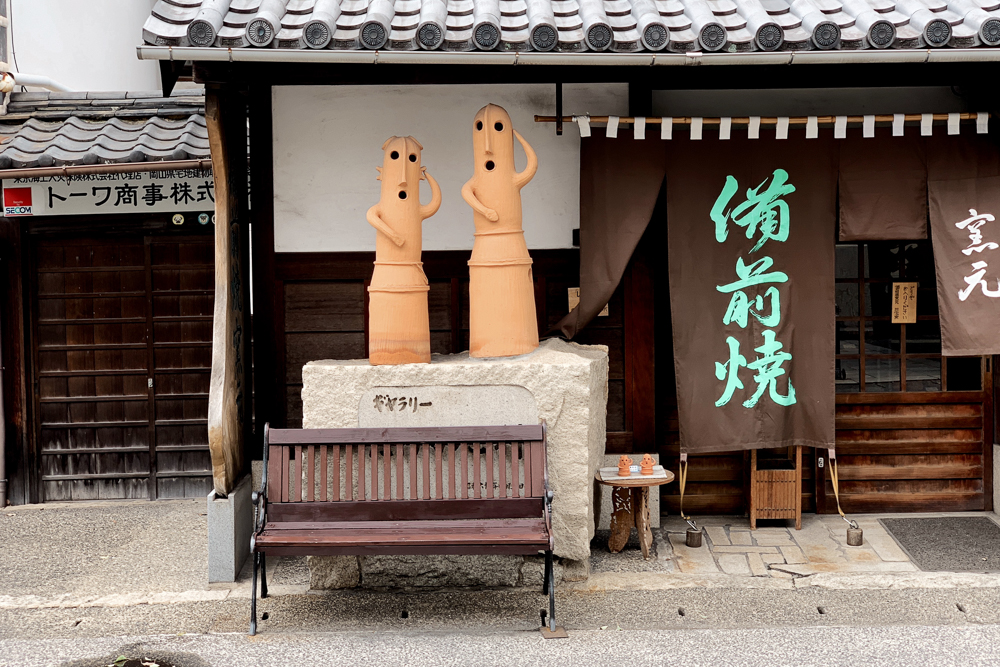 We did eventually make it to one toursity spot (OK – we did wander the canal district as well), which was Ivy Square. Once a factory, this now seems to have an exhibition hall and not much else that we could see. The exhibition hall did have a local photography show, which was really great. 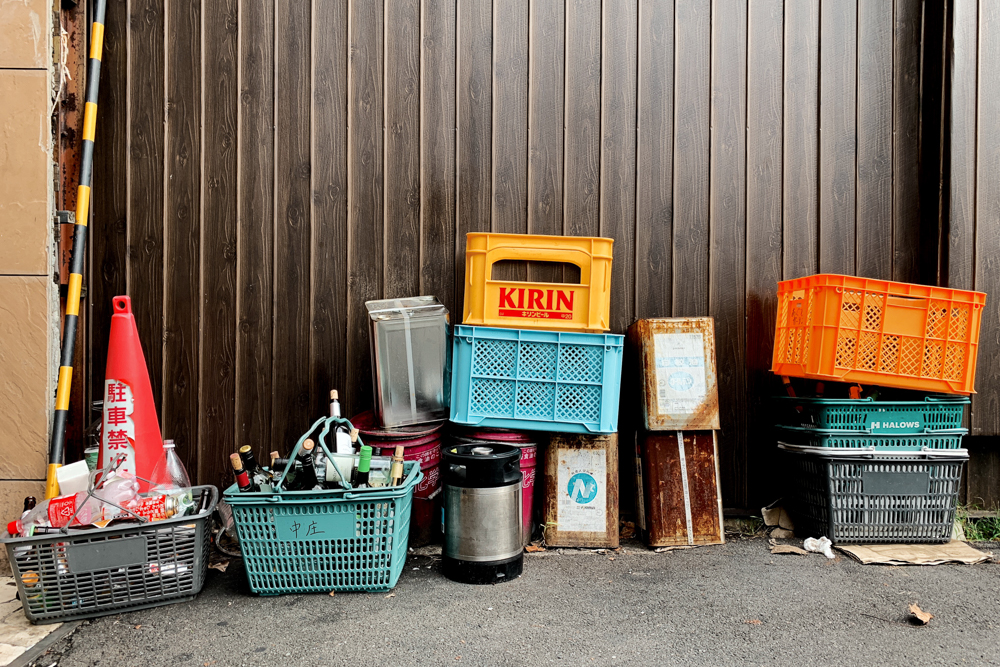 We also had awesome coffee and curry (not together) in Kurashiki – but I’m going to save food stuff for a later trip (if you’re impatient then check out my TripAdvisor reviews). 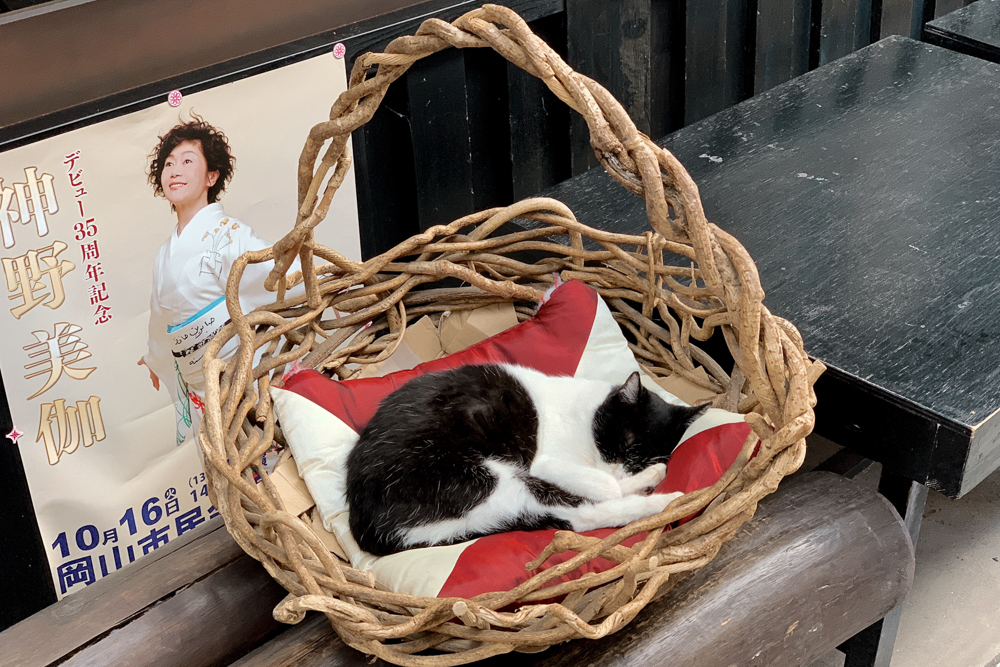 After we’d explored all that Kurashiki had to offer it was off to Kojima, the photo below will explain all… 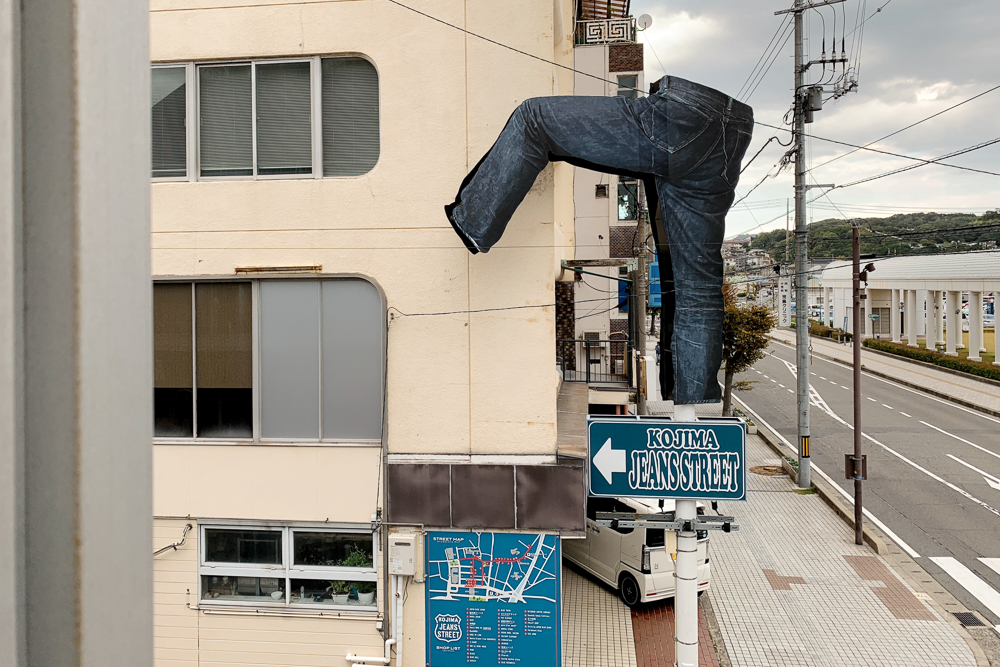 I may have mentioned that I have a small obsession with denim, and Kojima Jeans Street was one of those places I just had to visit at least once. This town plays on its heritage in a big way, even down to the train station lockers. 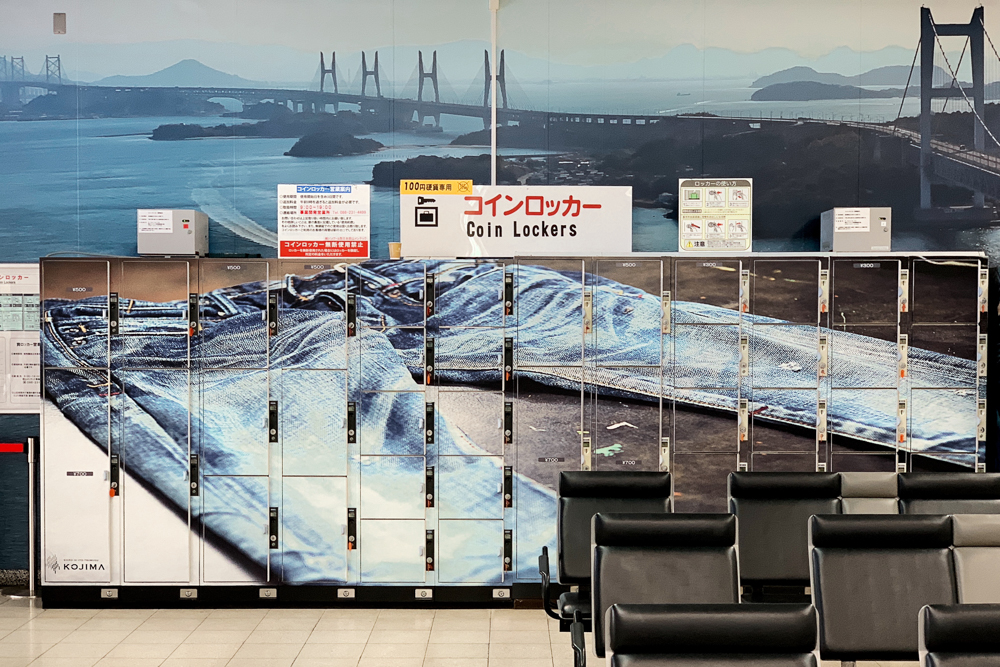 Jeans Street itself was a little odd, in that I was expecting it to be super busy and full of denim geeks – and it was actually quite quiet. As is often the case, I didn’t make it into many shops because I tend to be overwhelmed by the choice and end up buying nothing. 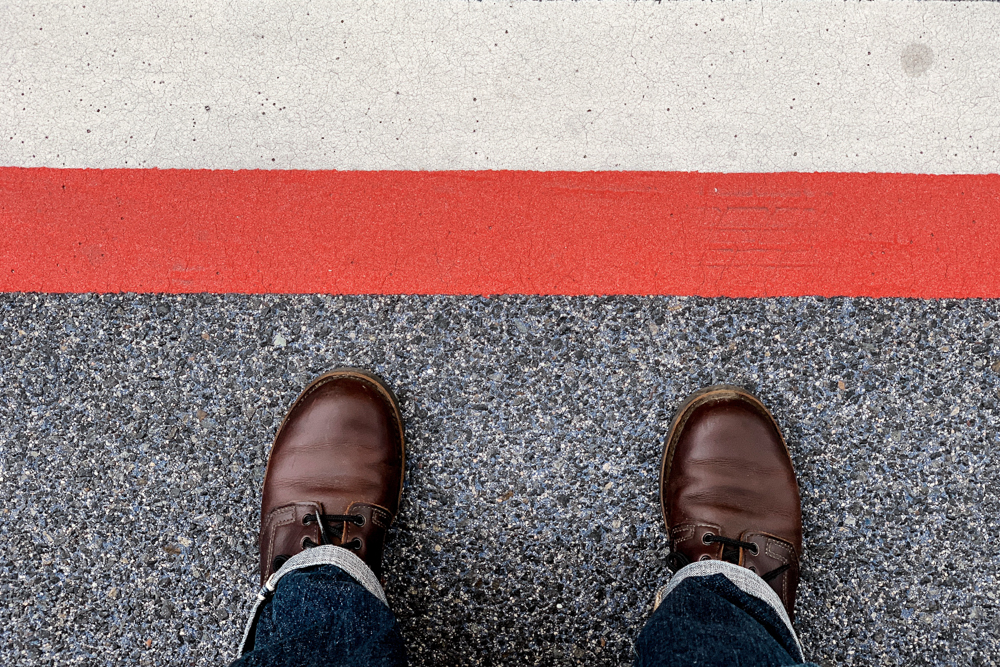 I did end up with a very nice t-shirt and pair of jeans from The Strike Gold (SG 3109s, one washed, left-hand twill if you must know). We also got a very nice coffee, and the walk through the town itself was fun. There’s a few more photos of Jeans Street at the end of this post if you want to see a little more.

I left A in the hotel room (we had an amazing corner room in the Koraku Hotel) and had one final walk around Okayama, which as mentioned before we hadn’t really explored. Wandering along the little canal was great, very peaceful and it really made me want to visit the city for a longer time at some point in the future. Once again I found myself pulled in by the little side streets, perhaps that says a little something about me. 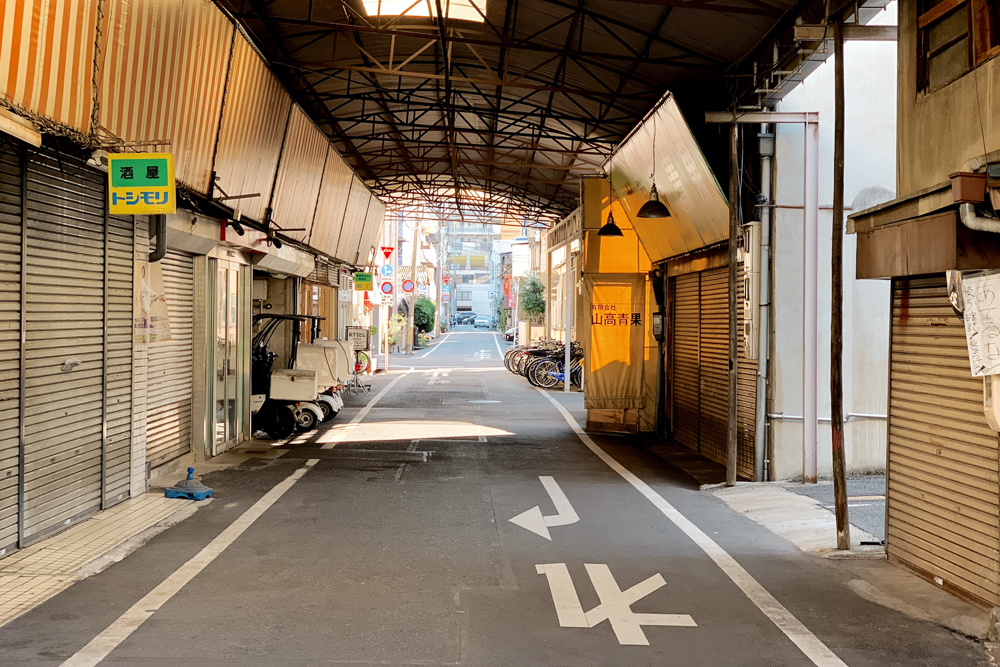 My next post will be all about what we found in Kyoto – and will likely mention the best hotel in the world. For now though, I’ll leave you with some final photos of Jeans Street (if you’re a denim head, you need to go). 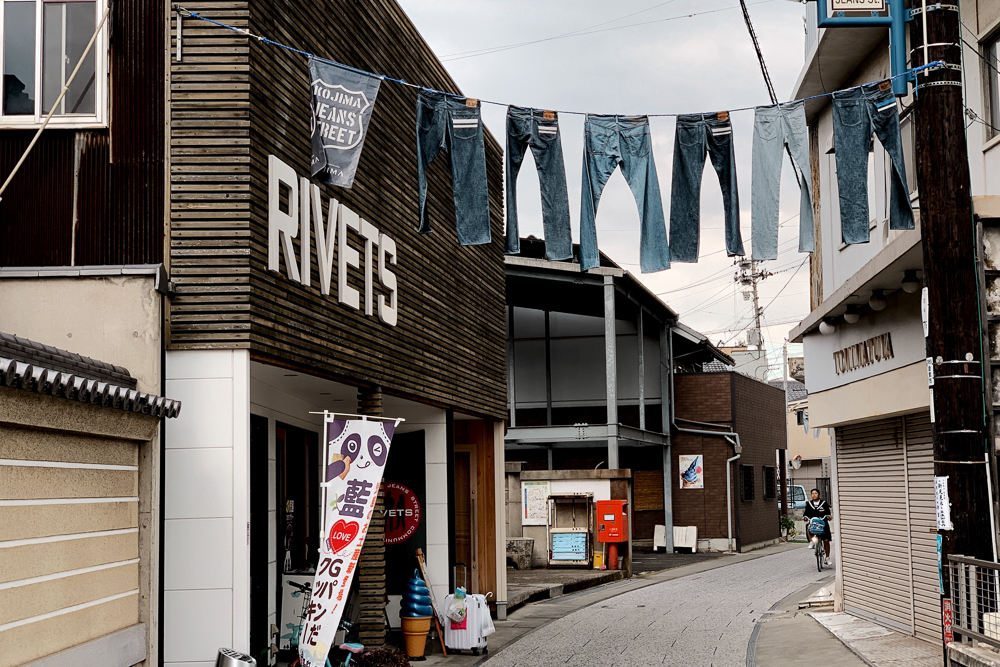 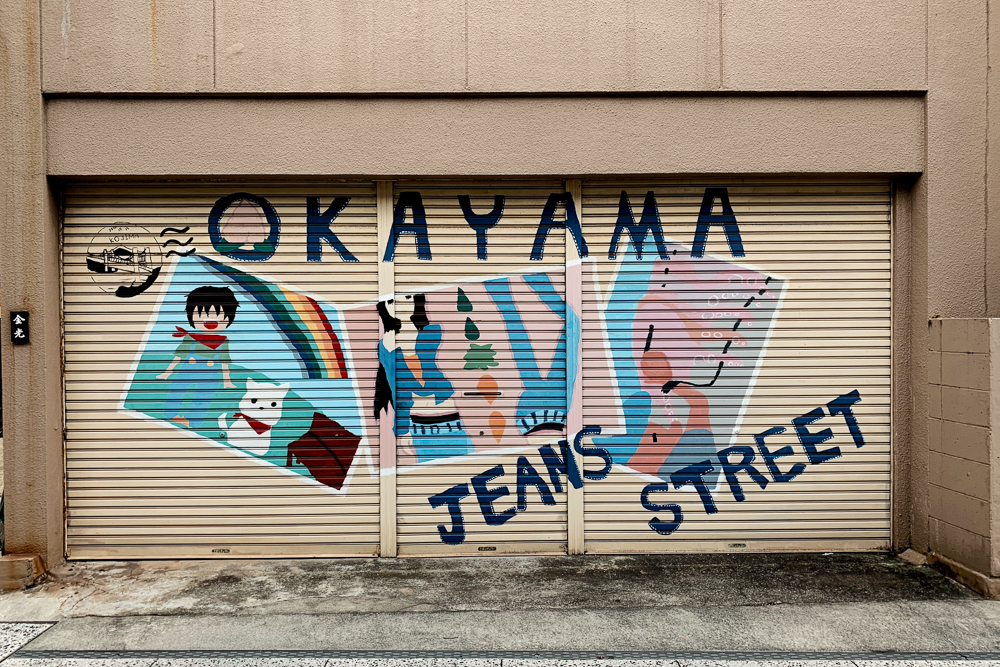 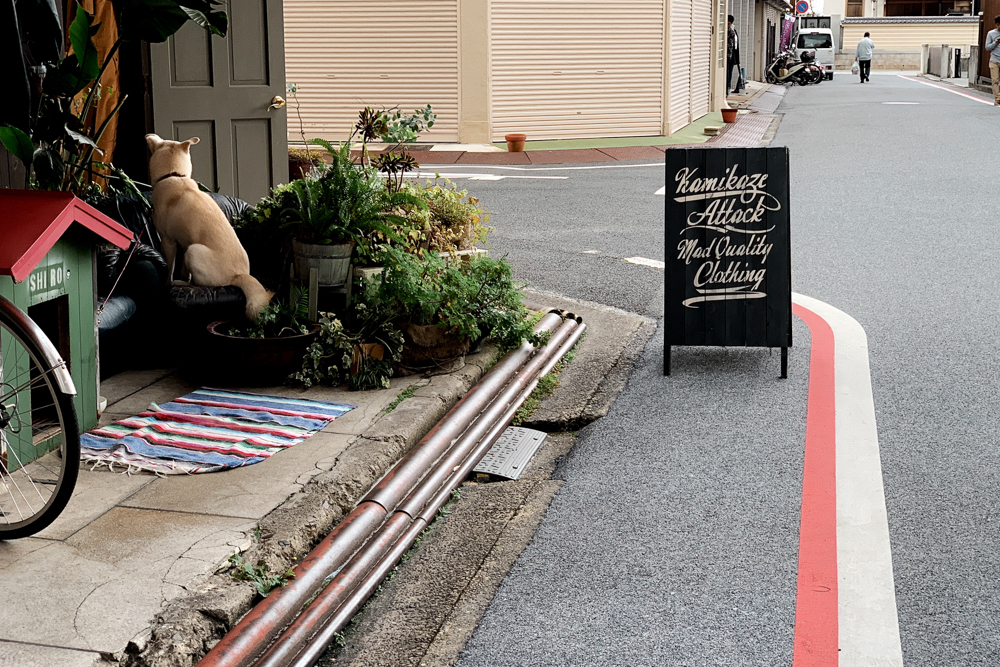